Some are more equal than others

Blog topics come to me in strange and interesting ways. Sometimes, I start off with a clear idea of what I want to write about, and it comes together easily. Other times, I might start off thinking I’m going to write about a particular topic, and then my post morphs into something entirely different and unrelated. And every once in a while, something random happens in my life that sparks creative inspiration, and that’s what I decide to go with.

That’s what happened this week. Actually, this time it was TWO unrelated random somethings that happened in my life. Well, not exactly random. And not completely unrelated, either. 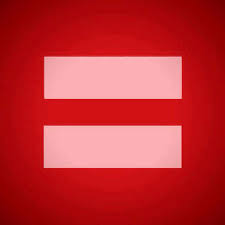 For those of you who have been living under a rock (or who don’t use social media), this image literally took over Facebook the week the Supreme Court heard arguments regarding the two same-sex marriage cases – one involving California’s Proposition 8, the other focusing on the federal Defense of Marriage Act (DOMA). If you’ve ever seen the blue and yellow Human Rights Campaign logo, this image should look familiar. At one point, when I was checking my Facebook account, the few individual profile pictures that were left were submerged in a sea of red equals signs., showing an overwhelming level of support for same-sex marriage.

This past weekend, I attended a children’s book writing and illustrating conference, where one of the breakout sessions focused on diversity in picture books. One of the examples used in the presentation was Uncle Bobby’s Wedding by Sarah S. Brannen. It tells the story of a guinea pig named Chloe who is devastated when she learns that her uncle Bobby is getting married – her big fear being that she will no longer be her uncle’s favorite person. Eventually, as Chloe spends more time with Uncle Bobby and his boyfriend, Jamie, she comes around, and is delighted to be the flower girl for their wedding. It’s a very sweet story, with a spirit of acceptance and love.

So these two Random Creative Inspirations weave together perfectly, right? It’s time for same-sex marriage to be legalized. We’re just as normal as everybody else. Same-sex relationships are becoming as mainstream as opposite-sex relationships.

Well, that’s not where I’m going with this. As much as I support marriage equality rights, I’m going to talk about the dangers of “normalcy.”

The speaker at the breakout session I attended at this conference was an editor for a major children’s book publisher, and Uncle Bobby’s Wedding comes out of that publishing house. Although she used numerous other books as examples throughout her talk, Uncle Bobby’s Wedding was the only one she read to us cover-to-cover.  And when she finished reading, these were my thoughts:

That was a beautiful story.

The illustrations were delightful.

And, unfortunately, that is NOT how it goes down for a lot of people.

The fight for legalizing same-sex marriage has used, overwhelmingly, the sameness argument. In a 2006 article published in American Psychologist, UC Davis researcher Gregory Herek carefully lays out an argument in support of same-sex marriage rights, grounding each of his assertions in social science research. His thesis essentially boils down to these main points:

Hence, the sameness argument. Or, to use a more political term, the assimilationist argument.

The dirty little secret about the fight for same-sex marriage rights is that there are factions within the LGBTQ community that are deeply divided over this issue. For example, the week that Facebook was flooded with red and pink equals signs, a number of people in the LGBTQ community responded by posting their own subversive versions of that image. One looked like this:

Granted, some who posted this divide sign are Religious Right-type people who are not in favor of legalizing same-sex marriage. But others who posted this image come from the trans* community, the poly/non-monogamous community, and others who exist on the edges of the mainstream LGBTQ umbrella.

One of the reasons some members of the trans* community chose the “divide” symbol over the “equals” sign is because of the Human Rights Campaign (HRC). Over a long period of time, the HRC, which is one of the largest gay advocacy organizations in the world, has committed some serious transgressions against the trans* community, the most noted being their support for excluding protections based on gender identity and expression from the Employer Non-Discrimination Act (ENDA). Their argument? It’ll pass more easily without the gender stuff. Just wait your turn, and be patient. (NOTE: To date, neither the exclusive or inclusive forms of ENDA have been signed into law.) More recently, at a marriage equality rally in front of the Supreme Court, a trans* activist was asked by an HRC staffer to remove a trans pride flag that had been erected behind the podium. These incidents highlight the ongoing tension between the “LGB”s and the “T”s, with the trans* community never feeling a sense of inclusion.

The divide sign highlights another very serious issue when it comes to same-sex marriage rights, and that is this: Not everybody in the LGBTQ community will benefit if Proposition 8 and DOMA are overturned.

What if you are gender-variant, and you don’t identify as “male” or “female”? So far, same-sex marriage policies haven’t included a “third gender” or alternative to the two-box binary gender system we’re so accustomed to.

What if you are in an ongoing polyamorous relationship? This, of course, is the “slippery slope” example that the Religious Right loves to whip out. Well, if we legalize same-sex marriage, then people will want to have multiple wives, or multiple husbands! Or they’ll want to marry their dog, or their horse, or their toaster! Usually, the response from marriage equality activists is this: Oh no, that will NEVER happen – because we’re just like heterosexual people.

Guess what? It happens. And when people enter into a polyamourous relationship, they are not legally protected. If a triadic (three-person) relationship splits up, there are no policies in place that guide how property and assets should be divided up. If a woman is in a quad (four people) and has a child with one of the men in the group, then decides to leave the quad entirely, how does child custody get sorted out? (Hint: She probably gets full custody, because the quad isn’t legally recognized by the state.)

I think some very serious questions are up for the LGBTQ community, and have been for quite some time. Are we fighting for equality – and if so, what does that mean? If assimilation is the goal that the movement is fighting for, then how does acceptance fall into that? Is it about fitting into the system, or changing the system? Uncle Bobby and Jamie fit into the system quite well. But that’s not true for quite a lot of us.

9 responses to “Some are more equal than others”